Car parked outside Saras Parlor went up in flames while the car owner and his friend were buying ice creams in the parlor. 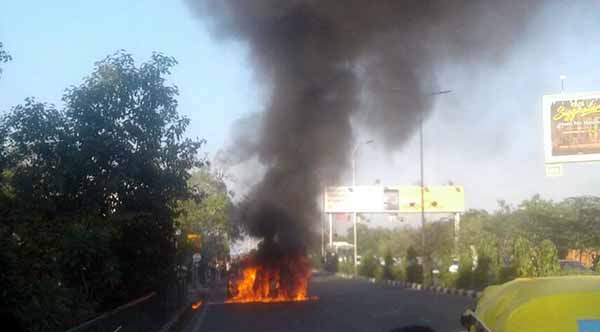 Car on fire on JLN Marg in Jaipur.

The owner and his friend had gone to Saras Parlor to buy ice-creams and when they came out, they were shocked to see the car going up in flames. Passers-by informed the police control room following which fire tenders were rushed to the spot. The incident led to a traffic jam which was cleared after the fire was controlled and the car was towed away from the road.

The car reportedly belonged to Ashiwini Mahral, a resident of Vaishali Nagar. He and his friend were passing by Saras Parlor when they decided to buy ice-creams. Ashwni parked his car on the road from across Saras Parlor. When they returned, they saw the car on fire.

A huge crowd of onlookers caused a traffic jam on GT Flyover. It took the police almost an hour to clear the jam.

In August, the police had arrested three youths including a Commerce College student for setting up cars on fire in Malviya Nagar Block- B. The trio used to put fire to car so that they could check if they would explode. They wanted to create scare in the colony by causing explosions in the cars, said police.

The police are investigation what caused the fire on Monday.