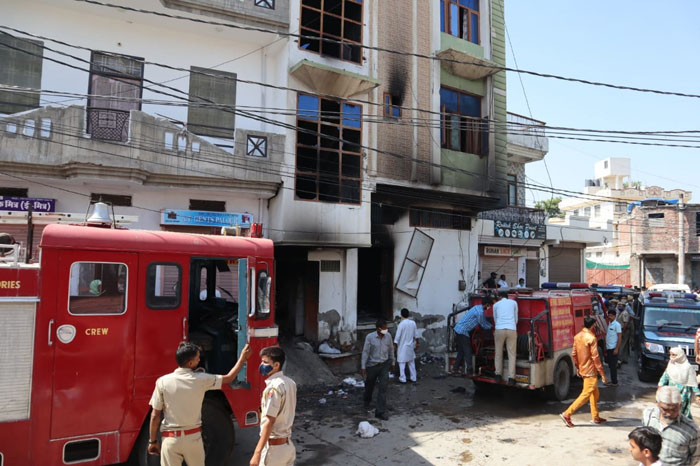 House in Brahmapuri area where fire broke out.

Jaipur: A 30-year-old man and his 2-year-old son were brunt alive when a three-storey house caught fire in Govind Nagar Extension of Brahmapuri area in Jaipur on Sunday afternoon. Two other children and two women sustained burn injuries. The ground floor housed a cotton warehouse where the fire began due to short-circuit, according to preliminary reports. The injured are undergoing treatment at SMS Hospital.

The fire broke out at the house of one Shahrukh (30) around 12.30 pm. A senior police officer said two of three floors of the building are occupied by the families of Shahrukh and his brother Yaqoob. The family is involved in cotton business and they keep the stock on the ground floor. Many sacks of cotton were there the broke out, prima-facie due to short-circuit. The fire engulfed the two floors. Shahrukh’s only son Sufiyan got stuck in the staircase area. When Shahrukh rushed there to rescue, he too got stuck.

A police team from Brahmapuri police station and JMC fire fighters rushed to the spot and launched a rescue operation. They rushed the victims to a hospital where the doctors declared Shahrukh and Sufiyan dead.