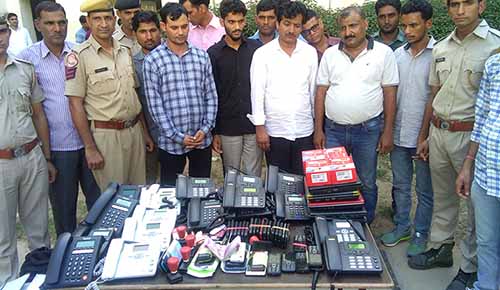 Jaipur: In a major interstate crackdown, Jaipur police on Thursday busted a bogus call centre in Noida and arrested its five directors. The accused were using young gradudates to call up people across the country with insurance, loan and share market investment offers and duping them by promising unrealistic returns. The police claim that the Siddhi Call Center duped about Rs 6 crore within a week prior to the raid as per the documents seized from the premises. The police had detained nearly 30 young people including several girls, but released them after interrogation. Those who were arrested were identified as Mohammed Iqram Khan, Shahid Khan, Amir, Mehraj Alam and Yamin. A man, Bhaghwan Sahai, an employee at state secreteriate in Jaipur, had lodged a complaint with Ashok Nagar police station in Jaipur, saying that he was defrauded of Rs 40 lakh by a company running a call center in Noida. The call center employees conned him into paying them Rs 40 lakh for bogus shares of a company between 2015 and 2017. The man came to know about the fraud when he tried to sell off the shares. A team of Jaipur crime branch was formed to investigate the matter. The team camped in Noida for several days to gather intelligence about the call center. It came up that the call center was involved in duping people across the country. The Jaipur police was assisted by Noida police when a raid was conducted and more than 30 people were detained. “Call center employees who were detained are being interrogated. We are trying to ascertain their role in the fraud. We would arrest those involved in the crime. Further investigation is going on,” said a police officer. Note: Want to share this story with someone? Just click on the WhatsApp or Facebook icon below:
Follow @ThePinkcityPost