The forest police arrested the owner of a farm where the tigress’s body was recovered. The officials said that the tigress got trapped in the iron fencing around the farm and died. However, sources said that there were marks of fresh injuries on her legs, leading to speculations about a poaching attempt. 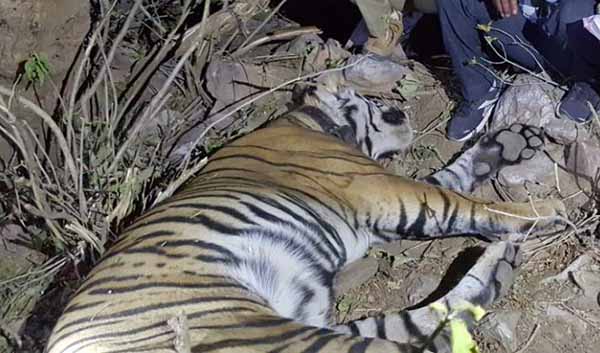 Sariska Tiger ST-11 whose body was found late on Monday.

Jaipur: The body of a tigress, known as ST-11, was found at Sariska tiger reserve in Alwar district on Monday. The death has come as a big shock to the wildlife lovers as it was reported close on the heels of mysterious disappearance of another tigress ST – 5.

The forest police arrested the owner of the farm where the tiger’s body was recovered. The officials said that the tiger got trapped in the iron fencing around the farm and died. However, sources said that there were marks of fresh injuries on his legs, leading to speculations about a poaching attempt.

Sariska CCF Dr Govind Sagar confirmed the news of the death. “The body was found in Kalamedha village near Indok area,” said a forest department officer.

The fact that tigress ST-5 was reported missing from the same area further fueled the speculations over poaching. Sources said that the area was the territory of ST-5.

ST-5 was reported missing on February 24. She and ST-11 were seen together in the same area before the disappearance.

ST-11 had been at the receiving end of the residents of nearby villages as he was reportedly killing cattle. His territory was close to human habitats. An attempt on his life had been reported in October, 2016. The tiger had killed a cow near the village. The villagers mixed pesticide in the carcass to kill the tiger, but the forest guards came to know about it following which the tiger was saved.

The Sariska administration has failed to remove iron fencing from the core area of the reserve despite repeated demands from the wildlife lovers.

Sariska had faced flak when all the tigers disappeared in 2004. Some tigers were relocated to Sariska from Ranthambore tiger reserve in 2008. There are currently 14 tigers in this reserve area. The number of majestic cats has now been reduced to 12 with the death of ST-11 and the disappearance of ST-5.