BJP MLA accuses Rajasthan minister of having ties with ‘anti-nationals’ 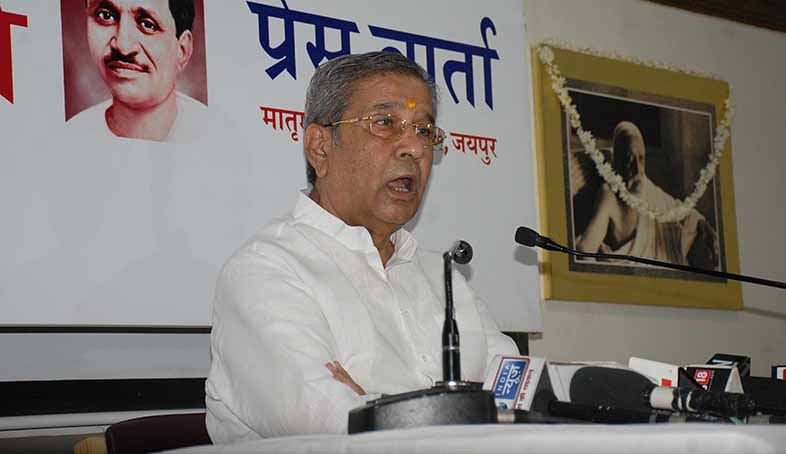 Ghanshyam Tiwari accused Rajasthan cabinet minister Yunus Khan of having ties with anti-national elements at a press conference in Jaipur.

Making serious allegations against the minister who is an MLA from Didwana constituency, Tiwari said that Khan had ties with ‘anti-national elements’.

Tiwari said that on June 2, some people shouted slogans in support of Pakistan outside Deedwana police station in Nagaur district. Tiwari said that it was a very serious matter and an immediate action should be taken against the guilty persons.

“As per the locals, these people had political patronage from state transport minister Yunus Khan. There are talks in the local community that Pakistani spies arrested from the area also had ties with Khan,” Tiwari said.

He said that Yunus Khan should resign from the cabinet.

“If these allegations are wrong, the onus is on him to prove his innocence. He should protect his dignity by stepping down,” said Tiwari.

He said that chief minister Vasundhara Raje should sack him immediately if he didn’t resign.

“I will complain about this to union home minister also and demand that these allegations should be investigated by the National Investigation Agency (NIA),” said Khan.

Tiwari said that the ongoing investigation into the incident was an eyewash.

“Police knows that Khan is close to the chief minister, so they would not take action against him,” said Tiwari.

An FIR had been registered with Didwana police station on June 8 in connection with the sloganeering. Some people allegedly shouted slogans such as “Pakistan zindabad” (long live Pakistan). The local police have arrested three people under sections 153A (Promoting enmity between different groups on grounds of religion, race, place of birth, residence, language), 153B (Imputations, assertions prejudicial to national-integration) and 120B (criminal conspiracy) of the IPC. Those arrested were identified as Chirag Pathan (19) Mohsin Tank (25) and Mohammad Sameer (24).

Yunus Khan had recently accused Tiwari of having ties with the Congress.

Ghanshyam Tiwari had last month been served with a disciplinary notice from the party to openly campaigning against chief minister Vasudhara Raje. In his reply to committee president Ganeshi Lal, he said that people would never surrender before a ‘corrupt’ government.

BJP can take a disciplinary action against the senior leader who has been at loggerheads with Raje ever since she was projected as CM candidate during the previous assembly elections.