Jaipur celebrates Diwali with enthusiasm and devotion. It reflects in the variety of beautiful lighting the city’s markets are decorated with. 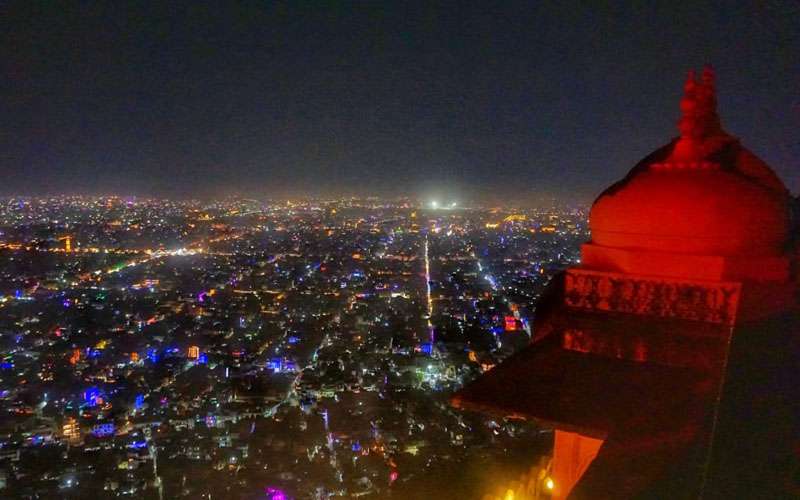 JAIPUR: Jaipur celebrates Diwali with enthusiasm and devotion. It reflects in the variety of beautiful lighting the city’s markets are decorated with. The markets have been decked up this Diwali also. The theme-based lighting – from Disneyland to Lord Krishna – will be the main attraction this year.

Kishanpol Bazaar has been decorated on the theme of Lord Shri Krishna. Johari Bazaar features Mata Lakshmi and Lord Ganesh sitting on a lotus flower.

In Chandepol Bazaar, the illuminated structure of Lord Shiva feeding Lord Ganesh will be the main attraction. Disneyland with giant statues of cartoon characters has been recreated at Choti Chaupar. The visitors will be able to see Sargasuli at Tripolia market.

All the entry gates including Sanganeri Gate, New Gate and Ajmeri Gate have been decorated with colourful high mask lights.

Many people are heading to Nahargarh to get a birds-eye view of the city lighting.

The traders are enthusiastic about the response from shoppers this year. “The last 2-3 years have been really difficult due to the Covid-19 period, but the shoppers and people are visiting the Walled City markets in large numbers this year. It is a great thing that the markets are abuzz with people,” said Ramesh Saini, a trader in Bapu Bazaar.

The prominent jewellers of Jaipur have erected ‘gates’ on all major roads in the city including MI Road.  The entire MI Road stretch of 3 kilometres has been decorated with heritage and natural lights. Selfie points have also been made at five light intersections.

Some of the best places to visit in Jaipur on Diwali include: