The bus broke the railing and then plunged nearly 100 feet into the river.  The possibility of the driver’s negligence is not being ruled out. He allegedly allowed an underage bus conductor to drive the vehicle. 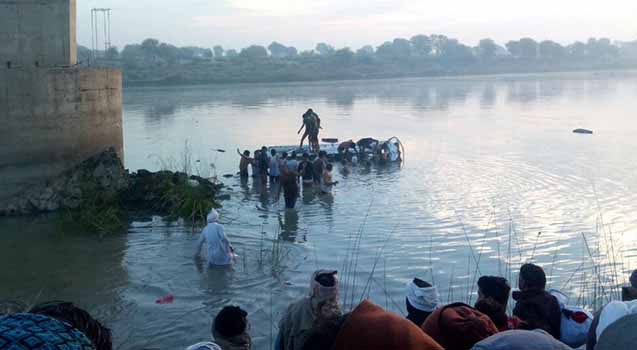 Jaipur: At least 33 people died on Saturday after the bus they were travelling in fell into Banas River in Sawaimadhopur district of Rajasthan. The mishap occurred on Dubbi Banas Bridge near Malarna Dungar area in the district around 8 am.

Those killed include women and children. The condition of two of the eight victims is stated to be critical. They have been admitted to the intensive care unit (ICU) of a private hospital. At least 12 victims have been identified. The bodies of 10 victims have been handed over to family members after postmortem examination.

The bus broke the railing and then plunged nearly 100 feet into the river.  The possibility of the driver’s negligence is not being ruled out, a police officer said. The bus driver was recklessly trying to overtake another vehicle on the bridge, preliminary reports suggest. Some eye-witnesses said that the driver allowed the bus’s underage helper to drive the vehicle. The helper was learning to drive. He couldn’t control the bus causing the mishap, the police however, said that an investigation was underway to determine what caused the tragedy. 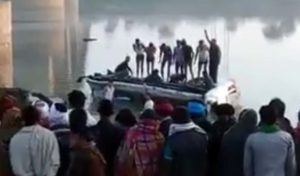 A video grab of the bus accident at Banas River in Sawai Madhopur district of Rajasthan.

The sitting capacity of the bus was 34 passengers. It was coming to Lalsot in Dausa where the passengers were to visit Ramdevra temple.

Prime Minister Narendra Modi expressed anguish over the incident. In a tweet, he said, “Anguished by the bus accident in Rajasthan’s Sawai Madhopur district. My thoughts are with the families of the deceased. State government is closely monitoring the situation, including rescue operations and providing all possible assistance to those affected.”

Rajasthan cabinet minister Rajpal Singh who was in Sawai Madhopur announced a componsation of Rs 2 lakh each to the families of the deceased victims and Rs 50,000 each to victims. Sawai Madhopur MLA Diya Kumari also reached the town.

Former Rajasthan chief minister Ashok Gehlot said that he was deeply aggrieved to know that more than 20 people have lost their lives after a bus fell into the river.

“My thoughts and prayers are with the families of the deceased. Hope the injured are provided proper treatment and recover soon,” Gehlot tweeted.

Senior district and police officers including district collector Kailash Chand Verma and superintendent of police Maman Singh rushed to the spot to supervise the rescue operation. Disaster relief teams were roped in to pull the bodies out of the river. At least 22 bodies had been fished out till the reports last came in. 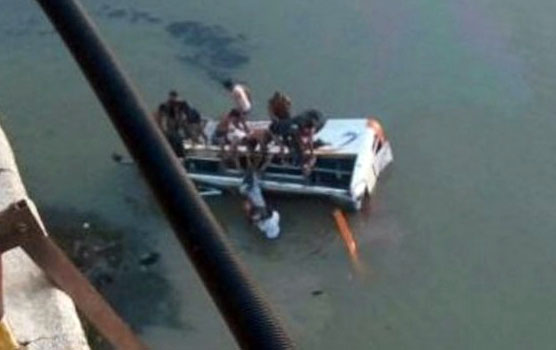 At least 28 people killed as bus fell into Banas river in Rajasthan.

“All the private hospitals have been alerted in the area to provide medical relief immediately on the arrival of any mishap victim,” district collector Kailash Chand Verma said.

The officer said that an investigation has been launched as to determine what caused the mishap.

“Our first priority is to ensure that the victims are provided relief immediately,” said the collector.

At least seven of the deceased victims are from Sawaimadhopur.