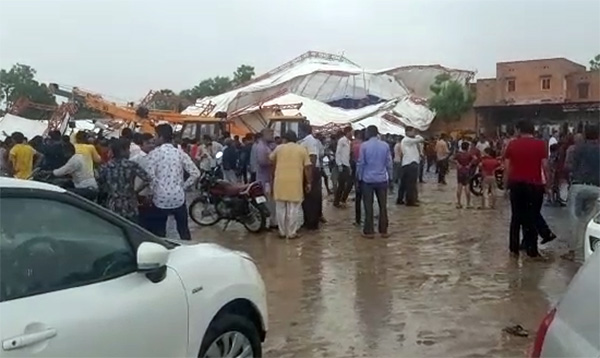 Pandal collapsed in Jasol area of Balotra in Barmer district, killing 14 people and injuring more than 100.

Jaipur: A day after 14 people were killed and more than 100 were injured after a pandal fell on them due to strong winds during a religious programme in Barmer district, Rajasthan chief minister Ashok Gehlot visited the families of the victims and expressed his condolences. He said that the local administration has been asked to ensure full-scale relief work.

“The incident was very disturbing and I am deeply saddened by the tragedy. We have ordered an enquiry. After getting its report on what caused the incident, we will take steps to ensure that such things are averted in the future. It is being probed if there had been any negligence,” Ashok Gehlot told media persons.

The incident took place in Jasol area of Balotra on Sunday. There were nearly 1500 people in the pandal to participate in a religious gathering. A ‘Ram Katha’ was being organised at Jasol area. As the dust storm ravaged the pandal, the power supply lines got snapped and many people were electrocuted. Some others were injured in the stampede that followed the electrocution. The pandal was uprooted.

The organizers were quoted as saying that the incident was unfortunate but it was a natural disaster and nothing could prevent. However, there were reports of negligence in the way the pandal was set up for the gathering.

The local administration had also not made enough security arrangements despite the fact that a large gathering was expected. Murlidhar Maharaj, who was leading the ‘Ram Katha’, is a popular religious figure in the local community. A huge number of people were expected to participate in teh Ram Katha.

Muralidhar Maharaj had to stop the sermons midway. He asked people to leave as the pandal started to get uprooted. He left the stage as the structure came down, leading to a stampede-like situation.