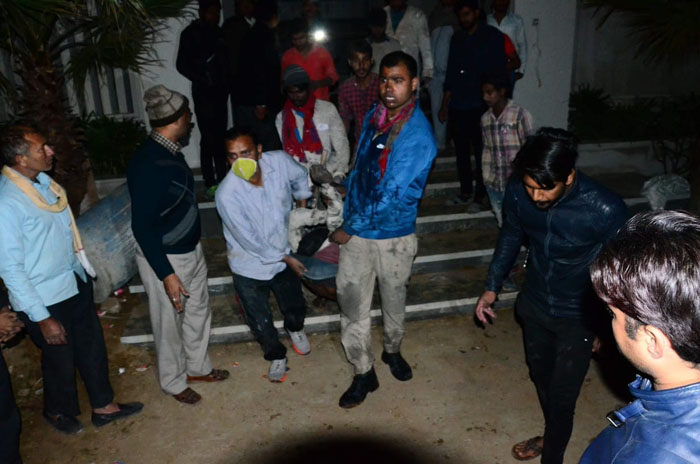 Injured being rushed out of house in Bajaj Nagar

Jaipur: Three people were killed while three others were admitted to a hospital in critical condition when an under-construction house caught fire in Anita Colony of Bajaj Nagar in Jaipur on Tuesday. The victims were labourers working at the house when the fire broke out. What caused their death – whether burn injuries or asphyxia – was yet not clear. Initial reports indicate that short circle caused the fire. The fire has been controlled.

According to preliminary reports, the deceased were Azhar Hussain, Nizam Mohammed and Saurav alias Sadiq. While Azhar hailed from Galta Gate area in Jaipur, Nizam was from Moradabad in Uttar Pradesh.

The fire broke out at the house number – B-50 in Anita Colony near Gandhi Nagar. It is learnt that the house was being built by a builder identified as Ananya Agarwal.

The three-story under construction house caught fire around 7.15 pm. Some labourers were working on the second floor where the fire broke out. Some people informed the police control room following which fire tenders were rushed to the spot. The fire fighters pulled labourers out one by one. Six of the labourers were rushed to a hospital where three died. Three others are still undergoing treatment.

It took fire tenders nearly an hour to douse the fire.

The police have launched an investigation what caused the fire.