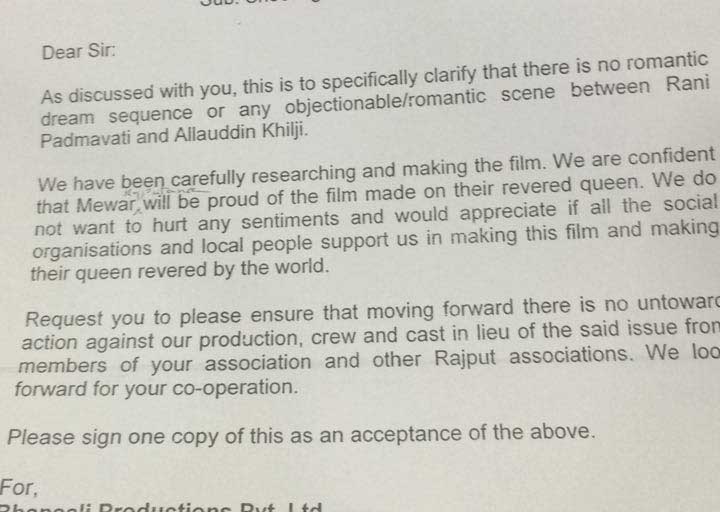 Jaipur: Three days after Padmavati director Sanjay Leela Bhanshali was assaulted in Jaipur, the director’s production house – Bhansali Productions – has written a letter to Rajput organizations in Rajasthan, clarifying that the movie won’t show any ‘romantic dream sequence’ or any ‘objectionable scene’ between Rani Padmavati and Allauddin Khilji.

“As discussed with you, this is to clarify that there is no romantic dream sequent or any objectionable/romantic scene between Rani Padmavati and Allauddin Khilji (in the movie),” the letter reads.

The letter claims that the production house studied and researched relevant history before making the film.

“We are confident that Mewar will be proud of the film made on their revered queen. We don’t want to hurt any sentiments and would appreciate if the social organizations and local police support us in making this film and making their queen revered by the world,” the letter says.

The production house has also requested that there be no untoward incident in the future.

“Please ensure that there is no untoward action against our production, criew and cast in lieu of the said issue from members of your association and other Rajput association,” the letter further adds.

Rajput Karani Sena that is accused of vandalizing the movie sets of Padmavati at Jaigarh Fort is garnering support from even senior Congress leaders in Rajasthan.

Congress leader in the state Pratap Singh said after the attack that Queen Padmavati was not anyone’s ‘lover’ as the filmmaker is portraying her in his upcoming flick, and was devoted to her husband. “Padmavati was not lover of anyone. Bhansali cannot hurt the sentiments of the people by portraying the sacrifice of Padmavati in a wrong way. Padmavati has a history, she had fought for everyone. Chittaur is a pride of the nation,” said Singh.

Karani Sena supporters gathered at Jaigarh Fort on Friday when Bhanshali was shooting scenes of Padmavati. They first damaged the equipment including the camera and then abused and slapped Bhansali.

Padmini (Padmavati) was the wife of king Rawal Ratan Singh of Chittor (now knows as Chittorgarh, a district in Rajasthan).