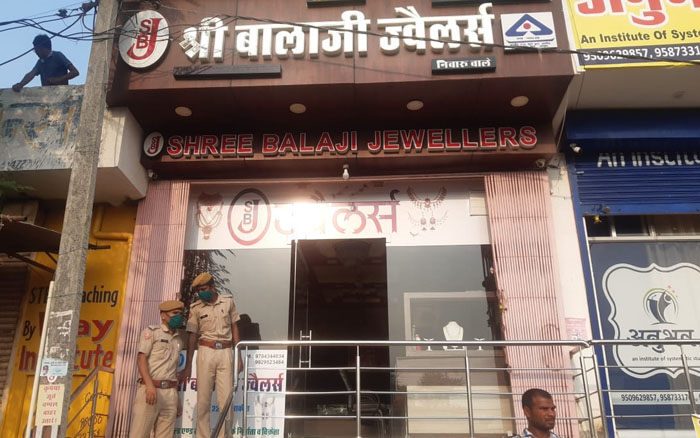 The jewellery showroom near Nadi Ka Phatak in Benad Road area of Muralipura where the robbery took place.

Jaipur: Three armed robbers barged into Sri Balaji Jewellers showroom situated near Nadi Ka Phatak on Benad Road in Muralipura on Saturday afternoon and made away with gold and silver jewellery worth Rs 90 lakh. The robbers escaped in the SUV belonging to the jeweller. The robbery was executed in less than 10 minutes.

Senior police officers and an FSL team reached the spot and launched an investigation. Around the same time, some robbers fired at a security guard outside ICICI Bank’s Mansarovar branch and reportedly looted Rs 26 lakh. Police petrolling was increased across the city to nab the robbers, but to no avail.

The showroom situated near Nadi Ka Phatak in Benad Raod area is owned by one Dinesh Kumar Saini, a resident of Jorawar Nagar. According to eye-witnesses, the robbers barged into the showroom around 2.05 pm. Dinesh, his son, identified as Roshan Saini and an employee, Kanha, were in the showroom at that time. The three robbers took Dinesh, Roshan and Kanha at gun points and asked to step aside.

The robbers then collected gold and silver jewellery and put them in a bag. In less than 10 minutes, they were out. They had also taken away the keys to the jeweller’s Scorpio car. Two of the robbers escaped on a scooty, while one fled away in the jeweller’s car.

Roshan asked his son to call the police control room, while he himself rushed out shouting for help. He informed a traffic police constable about the robbery following which senior police officers rushed to the spot.