Sources said that chief minister Vasundhara Raje was not in favour of appointing Gajendra Singh Shekhawat as the Rajasthan BJP president. Many leaders close to her were of the opinion that appointing a Rajput for the top post may distance Jats from the party. 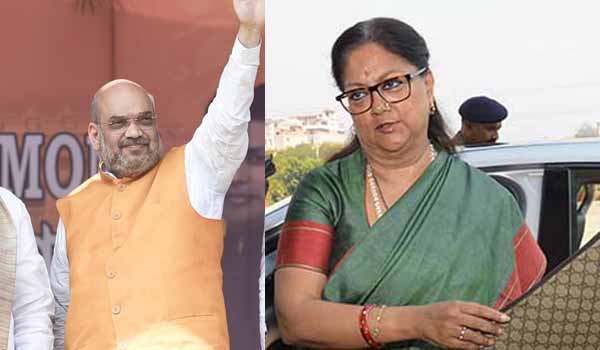 Jaipur: BJP national president Amit Shah held talks with Rajasthan chief minister Vasundhara Raje and members of the BJP core committee in New Delhi on Wednesday over the selection of the candidate for the state BJP president’s post. Though party leaders claimed that the meeting was to prepare the strategy for campaigning ahead of the upcoming assembly elections in Rajasthan, sources said that to decide the right candidate was on the top of the agenda list. Sources also said that Amit and Raje discussed the matter privately also; however, no consensus could be reached till the reports last came in. The name could be announced in the next couple of days. Sources said that chief minister Vasundhara Raje was not in favour of appointing Gajendra Singh Shekhawat as the Rajasthan BJP president. Many leaders close to her were of the opinion that appointing a Rajput for the top post may distance Jats from the party. Being one of the dominant castes in Rajasthan, Jat community will be a prominent vote bank in the upcoming assembly elections. Gajendra Singh Shekhawat had also been asked to attend the meeting with party high command leaders. Earlier, the meeting of Rajasthan BJP’s core committee took place at Bikaner House. Chief minister Vasundhara Raje hosted the lunch in which all senior BJP leaders from Rajasthan and cabinet minister were present. Those attended the meeting include Arjun Meghawal, Rajendra Rathore, Sri Chand Kriplani, Yunus Khan, Dr Rampratap, Ramnarayan Dudi, CR Choudhary, Madan Saini and Onkar Singh Lakhawa. Ashok Parnami had resigned as the Rajasthan BJP president on April 16. The post has been lying vacant since then. Earlier it was believed that Gajendra Singh Shekhawat was frontrunner for the post, but the state leadership didn’t agree on his appointment. The Congress leaders in Rajasthan including Sachin Pilot and Ashok Gehlot have leveraged the BJP’s failure to choose a candidate for the party’s top post. They have said that it showed the weakness of the party at the organizational level. Many names were floated for the post, but a consensus couldn’t be reached. With the assembly elections to be held in December, the party high command in Delhi wants to end the deadlock.
Follow @ThePinkcityPost