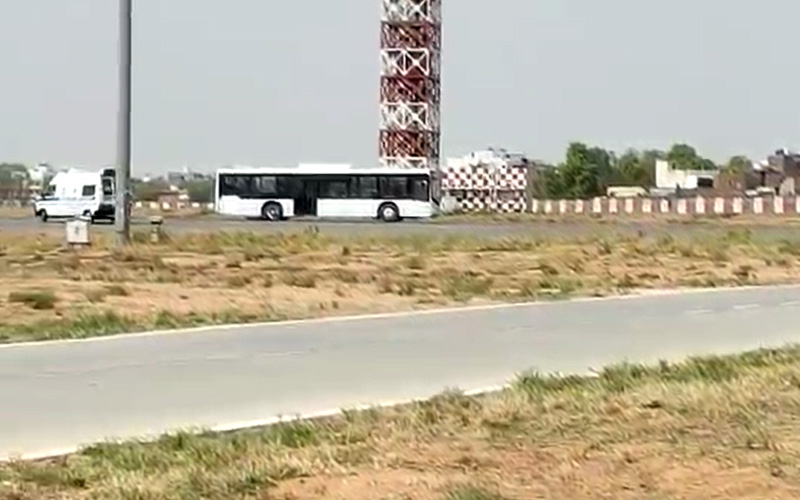 Video grab of a mock drill at Jaipur Airport.

Jaipur: The passengers at Jaipur International Airport panicked to see airport security personnel dealing with a flight hijack on Friday morning. They heaved a sigh of relief when it was confirmed that the hijack was a mock drill. Sources said that the mock drill was successful with the CISF handling the information as per the standard operating procedure (SOP).

It was reported that the plane which was to land at Delhi airport from Dhaka carrying 40 passengers and eight crew members had been hijacked by terrorists. As soon as the CISF officials received the information, they swung into action. The heavily armed CISF security personnel surrounded the runway of the airport. All these activities were witnessed by some passengers who were present at the Jaipur waiting for their flights. The mock drill was held at the Tango Taxi Isolation Way of the airport.

The officials got information that eight crew members and 40 passengers in the flight had been taken hostage by dummy terrorists. The drill lasted for about an hour during which airport security and CISF tried to handle the situation as per the SOP. Sources said that the mock drill was handled by CISF very efficiently and completed before the stipulated time, but the response time was yet to be confirmed.

“The exercise was to check the efficacy of the contingency plan and the procedure to deal with any case of plane hijacking threat. A scenario was created where a pilot of Delhi bound flight from Dhaka informed the police Jaipur airport control that the plane was hijacked and it has been diverted to Delhi Airport,” said sources.