Raje launched the scheme from Government Adarsh Senior Secondary School, Dahami Kalan in Jaipur by making girls have milk from her own hands. 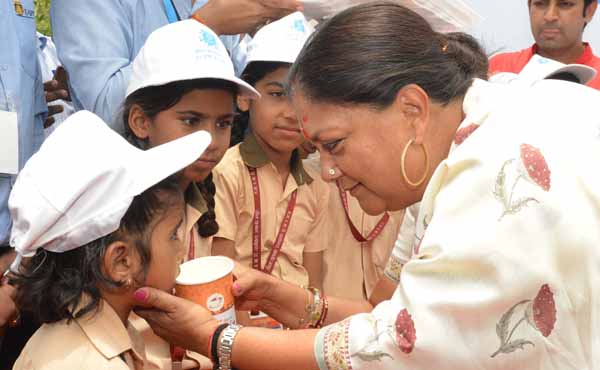 Jaipur: Chief minister Vasundhara Raje on Monday launched the Rajasthan government’s Annapurna Milk Scheme under which nearly 62 lakh children studying in government schools  and madrasas would be provided milk at least three days in a week.

Raje launched the scheme from Government Adarsh Senior Secondary School, Dahami Kalan in Jaipur by making girls have milk from her own hands. She said that the parents now don’t have to worry about nutrition as the government’s Annapurna Milk Scheme would add milk to the mid-day meal already being provided to school children.

“I am a mother, so I know how great it is to see your child grow healthy. Children studying in classes up to eight in government schools and madrasas will now get milk at least thrice in a week. We will give priority to milk collected from Women Milk Production Committees. I believe that women associated with these committees won’t compromise with the quality of the milk just as a mother doesn’t,” said Raje.

She said that the scheme would encourage more and more parents to enroll their children in government schools.

Students of several government schools had come to attend the function. Fruits were also distributed to children on this occasion.

Rajasthan education minister Vasudev Devnani said that the scheme would play a great role in boosting the nutrition level in school children.