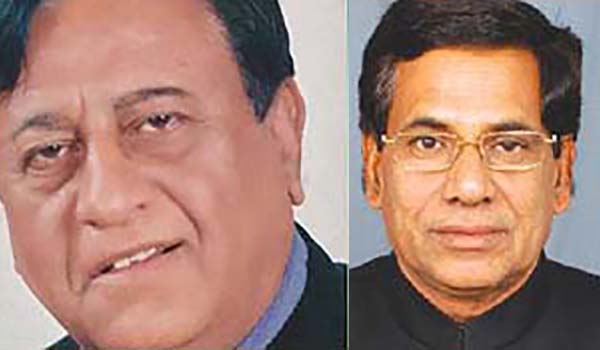 Jaipur: Find the latest news and live updates on Alwar by-election results here. Want to share this story with someone? Just click on the Facebook or WhatsApp icon above: 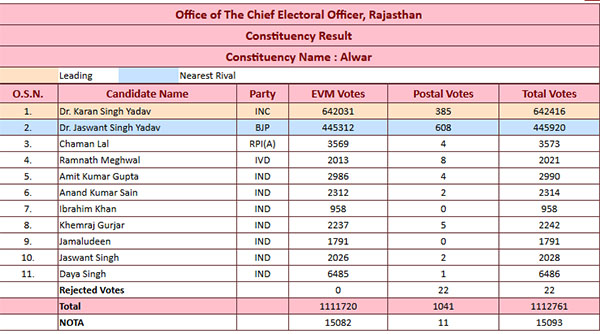 3.43 pm: Jaswant Singh Yadav of BJP accepted the defeat. He said that the party’s delay in declaring him as the candidate for the election cost him at least 1 lakh votes. He said, “I am taking the responsibility for defeat”. Karan Singh Yadav is now leading by 1 lakh 69 thousand votes.

Dr Karan Singh Yadav who is set to win from Alwar Lok Sabha constituency is a veteran politician in the state. He won parliamentary election from Alwar once and assembly elections from Behror twice.

3.24 pm: Karan Singh Yadav has taken a massive lead against his rival Jaswant Singh Yadav. The Congress candidate is leading by 156,000 votes now. His victory is now certain as 87% votes have been counted.

12.33 pm: 11 rounds of counting have been completed in Alwar rural area. Congress is leading by a margin of 17600 there.

12.03 pm: The margin of votes between Congress and BJP has gone up to 44,000. Congress is leading in most assembly constituencies.

After eight rounds of counting of votes, the results were: 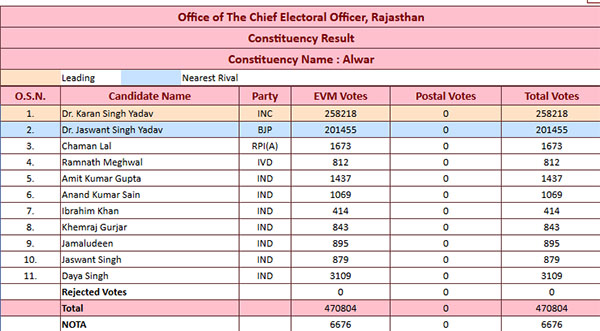 12.02 pm: After nine rounds of counting of votes, BJP has secured 27489 votes in Behror, trailing behind Congress that has received 32652 votes.

11.50 am: After 10 rounds of counting of votes, Karan Singh Yadav of Congress is leading by 10477 votes in Alwarcity constituency.

11.46 am: In Ramgarh, Karan Singh Yadav of Congress is leading by a huge margin of 30,000 votes. Only two rounds of counting are yet to take place.

11.31 am: Congress president Sachin Pilot will address a press conference at PCC headquarters in Jaipur at 12.30 pm. Workers are shouting slogans for Pilot.

11.15 am: According to the official figures released by the Election Commission, Dr Karan Singh Yadav of Congress is leading by 39,246 votes after eight round of counting of votes. He has secured 172535 votes, while Jaswant Singh Yadav of BJP has secured 133289 votes.

10.53 am: In the fourth round, BJP managed the lead in Kishangarhbas. Jaswant Yadav of BJP has received 4120 votes, Congress received 3522 votes.

10.50 am: Former Rajasthan chief minister Ashok Gehlot said that the by election will be an eye opener for BJP as it will be wiped out in the assembly elections due later this year. Congress workers started celebrating at PCC office in Jaipur and shouted slogans for Sachin Pilot and Rahul Gandhi.

10.41 am: Congress maintains its lead in Tijara even after the third round.

10.35 am: In Alwar city assembly constituency, Congress is leading by 5000 votes.

To receive latest updates on Mandalgarh by election result 2018: Click on the link below:

To receive latest updates and current news on Ajmer by election result 2018: Click on the link below:

8.40 am: Congress is leading according to the early trends.

BJP nominated Dr Jaswant Yadav as its candidate for Alwar parliamentary constituency. He took on Dr Karan Singh Yadav of Congress. Both are doctors and from Yadav community, a dominant caste in the constituency.

BJP and Congress played caste cards by fielding Yadav candidates. Jaswant Yadav and Karan Singh Yadav had fought an election against each-other about a decade ago. Jaswant Singh Yadav was an MLA from Behror constituency in Alwar.

Karan Singh Yadav was a cardiologist and the superintendent of SMS Hospital between 1998 and 2003. After he joined Congress, he won state assembly elections from Behror constituency and parliamentary elections from Alwar seat. The party nominated him believing that he had a strong grip on the electorate at the grassroots level in Alwar.

Jaswant Yadav kicked up a controversy when he allegedly made a communal remark when campaigning in a Muslim-dominated area. He was allegedly caught on camera saying that Hindus should vote for him and Muslims for Congress. The video went viral on social media channels.

Alwar had recently hogged headlines due to the violence in the name of cow vigilance. In April, cow vigilantes caught 15 people who were allegedly smuggling cows. Five of these alleged smugglers were thrashed. Of them, one, Pehlu Khan, died. The incident took place in Behror area from which Jawant Yadav is an MLA. Several other incidents of violence were also reported.

Of the total voters, almost 25% are from Yadav community in Alwar parliamentary constituency. There were two lakh Muslim voters.