Dhankhar has been a prominent lawyer in Rajasthan high court and represented clients in many high-profile legal cases. 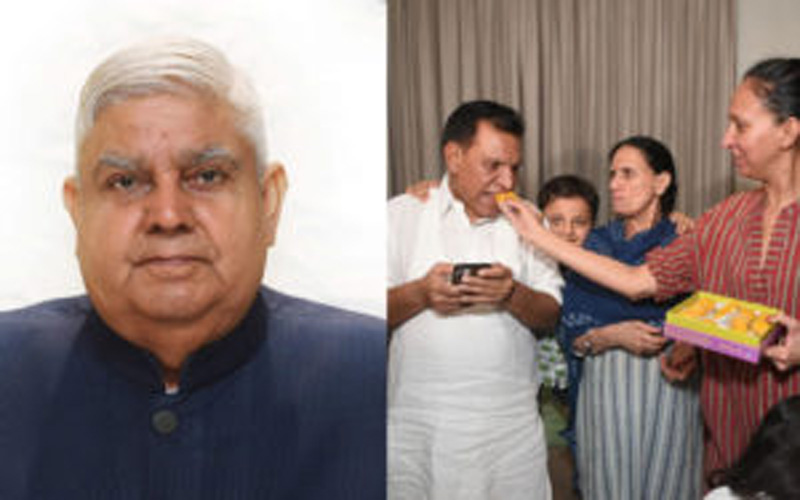 Jaipur: The National Democratic Alliance (NDA) has nominated Jagdeep Dhankhar, a native of a small village in Jhunjhunu district of Rajasthan, as its vice-presidential candidate. With Dhankhar’s victory almost certain, there is an atmosphere of celebration in not only his native place but also across the state.

Dhankhar has been a prominent lawyer in Rajasthan high court and represented clients in many high-profile legal cases. His political journey started when he became active in RSS. He came close to many influential politicians and RSS leaders after he started working with the right-wing organization. His major contribution to the RSS was that he formed a advocates’ council that closely worked with the organization.

Dhankhar was born in a farmers’ family on May 18, 1951 in Kithana village of Jhunjhunu district. He pursued primary education in his village and then got admission to Sainik School in Chittorgarh. He was selected for NDA, but he didn’t join. He received his Bachelor of Arts (BA) degree from Rajasthan University and then completed his LLB. He stayed in Jaipur and started practicing law here.

He was very active during the Jaiprakash Narayan movement. Some of the most prominent politicians he was very close to include Devilal and Bhairon Singh Shekhawat. He was elected an MP on a Janta Dal ticket. He also fought on a Congress ticket and won the member of parliament election. He was the union minister for law in the central government.

Dhankhar is currently the governor of West Bengal. Jagdeep Dhankhar’s brother Randeep Dhankhar is a Congress leader. He was the chairperson of Rajasthan Tourism Development Corporation during the previous Congress government.

The villagers of Kithana celebrated Dhankhar’s nomination by distributing sweets.