Bypoll for Ajmer parliamentary constituency was in the most limelight as winning this seat became more than a matter of prestige for the top three political leaders in the state – Vasundhara Raje, Ashok Gehlot and Sachin Pilot.

Jaipur: Find the latest news and live updates on Ajmer by election results here. Want to share this story with someone? Just click on the Facebook or WhatsApp icon above:

A resident of Sawar village in Ajmer district, Raghu Sharma had been an MLA from Kekari assembly constituency. He started his political career as a student leader. He was elected Rajasthan University Student Union president. He completed his LLB in 1982083 and then MBA in 1986-87. He was also awarded a doctorate. Sharma is known to have good chemistry with all senior Congress leaders in Rajasthan including Ashok Gehlot, Sachin Pilot and CP Joshi. Sharma is currently the vice president of the Rajasthan Pradesh Congress Committee. 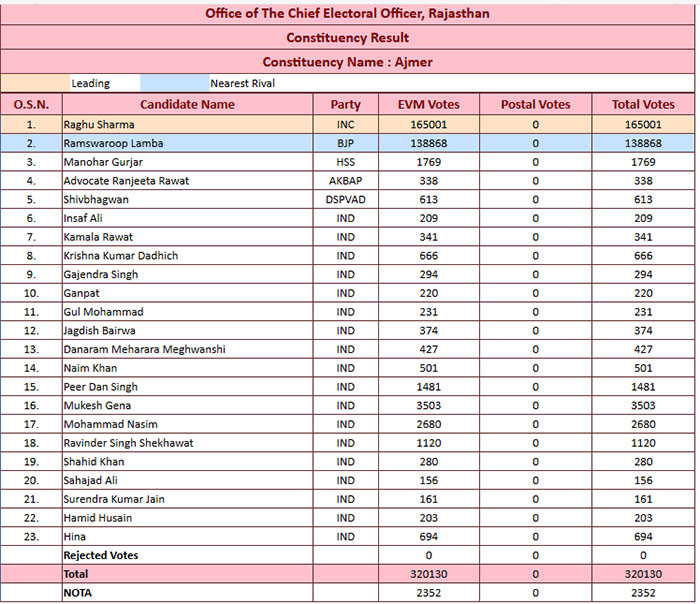 11.53 am: Raghu Sharma has maintained the lead by a margin of 29374 votes. Ramswaroop Lamba is leading only in Ajmer north and Nasirabad constituency areas.

11.31 am: Congress president Sachin Pilot will address a press conference at PCC headquarters in Jaipur at 12.30 pm. Workers are shouting slogans for Pilot.

11.11 am: Raghu Sharma leads by 22651 votes after 13 rounds. He has secured a total of 108161 votes, while Ramswaroop Lamba of BJP has secured 85510 votes. The margin of votes is 22651, according to the officials feagures released by the Election Commission.

10.50 am: Former Rajasthan chief minister Ashok Gehlot said that the by election will be an eye opener for BJP as it will be wiped out in the assembly elections due later this year. Congress workers started celebrating at PCC office in Jaipur and shouted slogans for Sachin Pilot and Rahul Gandhi.

To get latest updates on Mandalgarh by election result 2018: Click on the link below:

To get latest updates and current news on Alwar by election result 2018: Click on the link below:

9.46 am: In Ajmer, Raghu Sharma is leading in seven constituencies by 868 votes. Ramswaroop Lamba is leading only in Nasirabad by 1228 votes.

9.31 am: The second round of voting has begun in Ajmer. Congress is leading by 8492 votes.

9.27 am: In almost all constituencies, Congress is leading. BJP is leading only in Nasirabad.

9 am: Congress is leading in both Kishangarh and Masuda constituency areas.

8.35 am: Special traffic arrangements have been made on Nasirabad road for the counting of votes. Traffic has been prohibited at Parbatpura junction. No vehicle is being allowed to enter the area near the counting center.

8.30 am: There are eight assembly constituency in Ajmer Lok Sabha constituency area. The counting of votes received by post have been started first. District administration officials said that it would take time to announce the results. The final results will likely come in by 5 pm.

8.00 am: The counting of votes has begun at Government Polytechnic College in Ajmer. Heavy security arrangements have been made at the counting center. 81 tables have been set up in different parts of the college building to count the votes for 23 candidates.

Nearly 65% voters cast their votes on January 29. Twenty-three candidates including 20 males were in the fray. There were 18,42,992 voters in this Lok Sabha constituency.

Bypoll for Ajmer parliamentary constituency was in the most limelight as winning this seat became more than a matter of prestige for the top three political leaders in the state – Vasundhara Raje, Ashok Gehlot and Sachin Pilot.

Raje wanted to leave no stone unturned to prove her grip on the electorate by winning the home constituency of Sachin Pilot. On the other hand, the ongoing tussle between Pilot and Gehlot for supremacy made this seat a test for these two veteran Congress leaders.

The victory on the home turf will go a long way in strengthening the position of Pilot when the name of the chief ministerial candidate would be decided for the assembly elections in December this year. Pilot’s defeat would probably tilt the odds in favor of former chief minister Gehlot who already has his contribution to the party’s performance in Gujarat assembly elections to his credit. Pilot represented Ajmer Lok Sabha seat from 2009 to 2014.

Pilot and Gehlot, however, put up a great show of unity during the campaigning for the by elections.

The fight in Ajmer was between Raghu Sharma of Congress and Ramswaroop Lamba of BJP. Raghu Sharma is a former MLA and has been chief whip in the state assembly. He had been an MLA from Kekari assembly constituency from 2008-2013. He has fought election from Jaipur parliamentary constituency also.

On the other hand, Ramswarup Lamba is the son of late Ajmer MP Sanwar Mal Jat who died of cardiac arrest in August. Sanwar Lal Jat had suffered heart attack while the party’s national president Amit Shah was taking a meeting of ministers here on July 22. After battling for life at a hospital in Delhi, he breathed his last on August 9. The BJP wanted to ride the sympathy wave by declaring Lamba as its candidate for Ajmer.