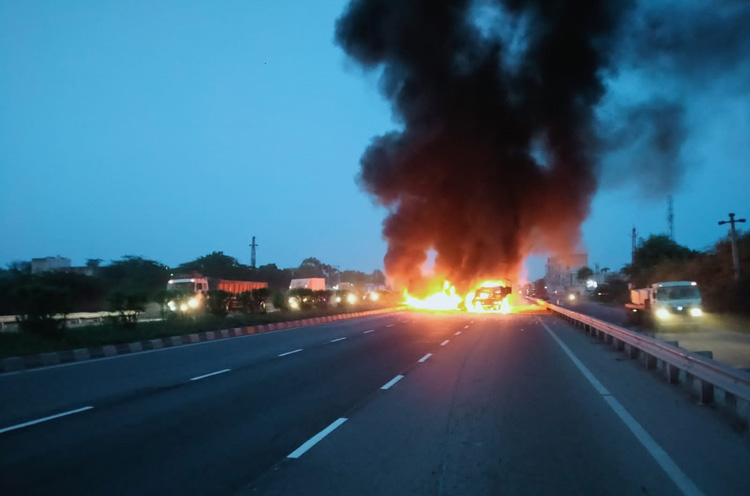 Jaipur: Four people were burnt alive when two trucks collided head-on on Ajmer-Beawar National Highway in Adarsh Nagar area of Ajmer on Tuesday. Both the trucks caught fire. The victims were two drivers of the truck and two helpers. The incident created panic in the area as fire flames emanated from the trucks. The bodies were put in the mortuary of a hospital in Jawahar Lal Nehru Hospital in Ajmer for a postmortem examination. The bodies were then handed over to the family members.

The deceased men were identified as Suresh Nitharwal (35), Sanjay Leel (22), Sheeshram Gurjar (22) and Omprakash (20). Suresh and Sanjay were relatives and residents of Shahpura area in Jaipur. Suresh was the driver of one of the trucks, while Sanjay was the helper. Sheeshram Gurjar was a resident of Kushalgarh in Alwar, while Omprakash belonged to Doba.

The mishap occurred around 6 am. One of the trucks was carrying marble slabs and the other cement sacks. After the head-on collision between the two vehicles near Rajeev Gandhi Smiriti Van, they caught fire. By the time a rescue operation was launched, the four people who were in the truck were burnt alive.

A huge crowd of people gathered on the spot. The police rushed the victims to the hospital, but all four people were declared brought dead by the doctors. Police said that one of the trucks had lost balance, causing the mishap.