1982-batch IPS officer was appointed after a high-level meeting in CMO.

Ajit Singh appointed new DGP Rajasthan. A guard of honor was given to outgoing DGP Manoj Bhatt (image above) on Monday.

Jaipur: 1982-batch IPS officer Ajit Singh Shekhawat has been appointed Rajasthan director general of police (DGP). He is replacing Manoj Bhatt who retired on Monday. The new DGP was DG, Prison before he was appointed for the top post. Ajit Singh’s name was finalized during a meeting presided over by the chief minister Vasundhara Raje at chief minister office (CMO). He is the senior most IPS officer in Rajasthan after 1981-batch IPS officer Navdeep Singh. OP Malhotra was also a likely candidate for the post, but Ajit Singh’s role in containing damage amid public outrage against Anandpal Singh encounter tilted the balance in his favor. 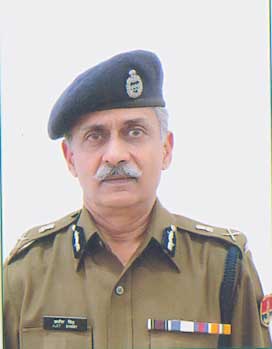 Being a Rajput community IPS officer, he was sent to Sanvrad – Anandpal’s native village – hold talks with the community leaders. Though a man was killed and several others were injured including 30 policemen, he handled the situation well, the government believes. His appointment may further please the Rajput community that was at loggerheads with the Raje government over the encounter. Ajit Singh has a clean image. He served as additional director general (ADG), ACB for five years. Ajit Singh has also served as ADG (crime), IG (CID-CB), IG (Udaipur), and SP of Jaipur City, Jodhpur, Jaipur rural, Sawai Madhopur, Jhalawar and Sirohi, apart from holding many other positions in the police force. Ajit Singh will serve as DGP Rajasthan for four months until he retires in November. Sunil Kumar Mehrotra who is ADG, telecommunications will hold the additional charge of DG, prisons. A guard of honor was given to outgoing DGP Manoj Bhatt who had been holding the post since March, 2015. Read Also: Over 20 years, aspiring IAS and lawyer murdered 3 people in 3 cities, held in Jaipur
Follow @ThePinkcityPost