Air pollution reaches record levels in Jaipur due to fireworks 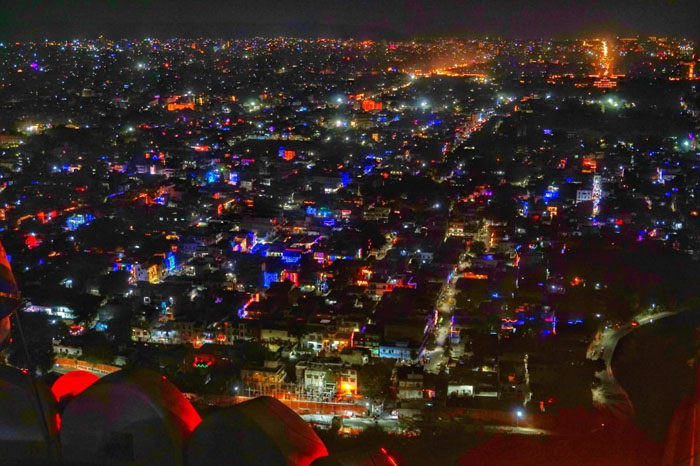 Jaipur was illuminated on the occasion of Diwali

Jaipur: The air pollution level reached record levels in Jaipur and Jodhpur due to fireworks. The air quality index in these two cities was measured to have crossed 300. The doctors have sounded an alarm for those suffering from respiratory diseases and said that asthma patients should stay indoors until the air pollution level returns to normal.

AQI level was measured at 370 in Jaipur on Friday morning. There was fog in the morning and the visibility in Jaipur airport area was less than normal, experts said.

The change in weather also contributed to the increase in air pollution level. As the temperature dropped, the smoke hang over the city.

The AQI level was 177 in Jaipur during the previous Diwali as there was a complete ban on fireworks due to the Covid-19 situation. The fire crackers were allowed from 8 pm to 10 pm, but the people burst firecrackers past midnight, flouting the Supreme Court directions in this regard. Only green firecrackers were allowed, but the residents were seen using regular crackers.

The situation was more or less the same in Jodhpur where the AQI level was measured at 340. Both Jaipur and Jodhpur were in red zones in terms of air pollution.

The Supreme Court had earlier overturned the Calcutta High Court’s blanket ban on firecrackers and instead allowed green crackers in areas where the air quality is “moderate”. As per the Supreme Court’s order, crackers (green crackers) made using relatively less-polluting materials could be used.