Both Bhupendra Saran and Suresh Dhaka are the main accused in the senior teacher recruitment exam paper leak case. 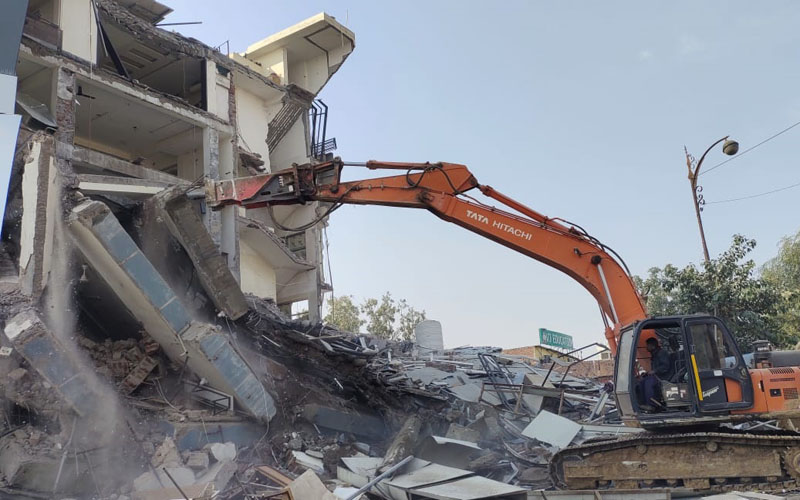 JAIPUR: The Rajasthan government has started taking strict action against paper leak masterminds Bhupendra Saran and Suresh Dhaka. A coaching institute run by them at Gurjar Ki Thadi area was bulldozed by a team of Jaipur Development Authority (JDA) on Monday. Adhigam Coaching was housed in a building located on a corner plot and was alleged to have encroachments.

Both Bhupendra Saran and Suresh Dhaka are the main accused in the senior teacher recruitment exam paper leak case.

It took a team of the JDA enforcement wing nearly 2 hours to raze down this 5-storey building. A JCB machine was used to bulldoze the building.

After investigating, a notice was served on January 8 to the building owner Anil Agrawal and coaching owners Bhupendra Saran and Suresh Dhaka. The action was taken after completing all the legal formalities. The coaching institute was being run in a rented building.

The building owner Anil Agrawal has filed a petition in the JDA Tribunal against the JDA action. . The matter will come up for hearing today. Agrawal’s lawyer Sohan Solanki said that they were not given any time to demolish the said illegal construction.

It came up In the investigation conducted by the technical team of JDA that two residential plot were used for the construction of the building spread over an area of 500 square yards. According to JDA officials, the building bylaws were flouted and the setback rules were not followed.