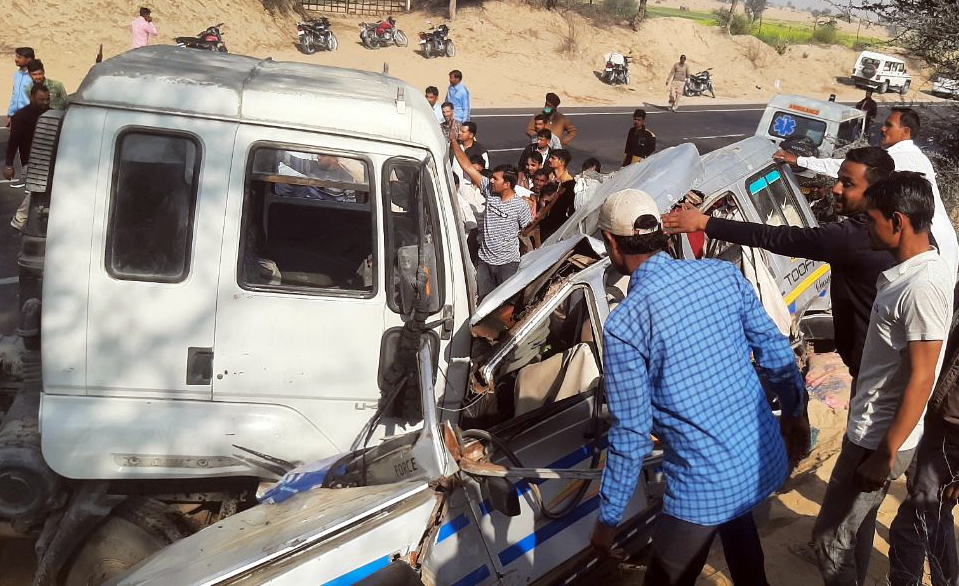 Jaipur: At least six people were killed while seven others were injured when the jeep they were travelling in collided with a truck in Suratgarh town of Sri Ganganagar district on Saturday morning. The collision was so intense that the front portion of the jeep was completely damaged. The seven injured victims are currently undergoing treatment.

The mishap occurred in Rajiyasar village around 11 am. An overspeeding truck was overtaking another vehicle when it collided head-on with the jeep approaching from the opposite direction. Six passengers of the jeep were killed on the spot. The victims are four women, a child, and the jeep driver. According to preliminary reports, the victims are residents of the nearby Kishanpura area and were on their way to Ramdevra on a pilgrimage.

The police had to rope in an earth-moving machine to separate the jeep from the truck. The parts of the jeep were cut open to pull the victims out. The injured were rushed to a local hospital. Six were declared brought dead. Their bodies have been put in the mortuary of a government hospital for a postmortem examination.

The accident caused a traffic jam on the road. Eyewitnesses said that the truck driver was in an inebriated condition. The police have launched an investigation. An FIR has been registered against the truck driver who was injured in the mishap.