Accident in Bundi: 24 dead as bus falls into river 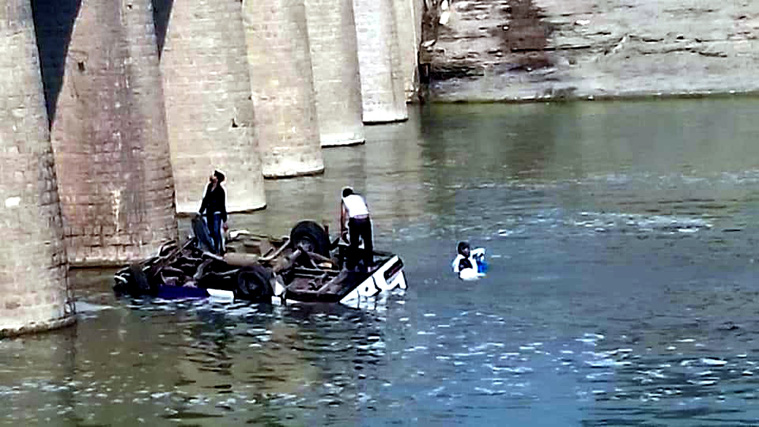 A video grab of Bundi bus accident. The bus fell into a river.

Jaipur: In a tragic accident, at least 24 people were killed as the bus they were travelling in fall into a river in Lakheri area of Bundi district in Rajasthan on Wednesday. The victims were returning from a wedding. The bus was coming towards Bundi from Kota.

The incident happened around 10.30 am. The bus was carrying 40 people and headed for Sawaimadhopur.

The bus was on a flyover – near 5 km from Lakheri. The flyover didn’t have a road divider. The bus lost balance, broke the railing of the flyover and fell into the river. The local residents informed the police following which teams from several nearby police staions rushed to the spot. Rescue teams of State Disaster Management Department also arrived at the spot. According to preliminary reports, there were 28 people onboard the bus.

Senior administration and police officers from the area are supervising the rescue operations. The divers were trying to pull the victims out of the driver. The bus was also being pulled out with the help of a crane.

A huge crowd of local residents gathered on the spot. The local residents alleged that the mega highway connecting Bundi in Kota is in a bad condition with the roads being too narrow at several places. The residents have complained about it several times, but nothing was done by the administration. The railing on the both sides of the flyover is also weak. Several mishaps have taken place in the past at the same spot.