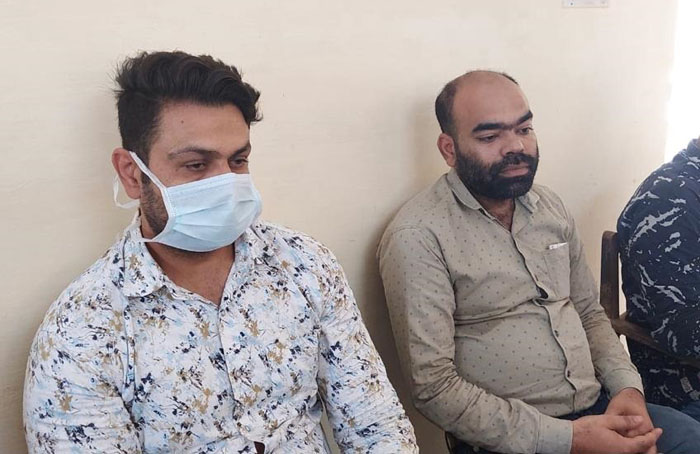 Principal (in mask) arrested for taking bribe in Bikaner.

Jaipur: Rajasthan anti-corruption bureau (ACB) on Friday arrested the principal and clerk of NM College Nursing in Bikaner after they were allegedly caught taking a bribe of Rs 10,000. They were demanding money from students after threatening in the name of not allowing them to appear in the practical and main exams. Both were booked under relevant sections of the Prevention of Corruption Act. ACB officials said further investigation is going on.

The accused were identified as Anis Ali and Manish Badgurjar. Anis is posted as the principal, while Manish a clerk at NM College of Nursing. The college is affiliated with RUHS, Jaipur.

DG ACB said that the ACB had received a complaint about the duo. The complainant stated that Anis and Manish were demanding Rs 10,000 from each student of the college. They threatened that the students would be able to get the degree only if they paid the money.

The trap was laid under the supervision of ACB Add Rajnish Poonia. The duo was arrested red-handed, DG Soni said. Both were taken into custody and arrested under the Prevention of Corruption Act.

He added that ACB teams are carrying out raids at the houses and other places belonging to the two men. The agency is trying to determine if other students were also forced to pay the bribe.