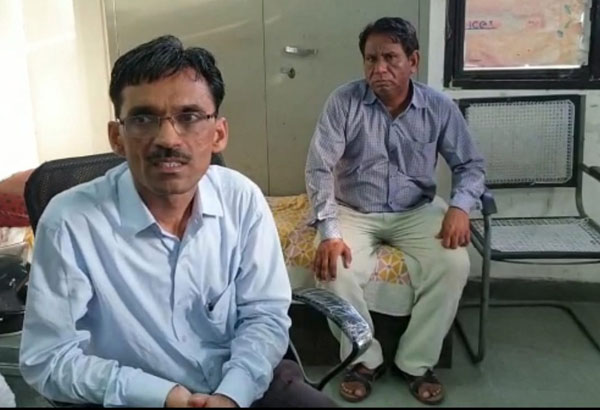 Two of the three PWD officials who were arrested by ACB.

Jaipur: The Rajasthan anti-corruption bureau (ACB) on Thursday arrested Public Works Department (PWD) assistant engineer (AEn) Dinesh Pareek after he was allegedly caught taking a bribe of Rs 70,000 inside the state assembly building. After arresting XEn, the ACB also held Executive engineer (XEn) Jitendra Dakha and cashier Abdul Kareem from the PWD headquarters for being part of the bribery racket.

The trio was allegedly demanding bribe from an electricity maintenance contractor. The contractor had approached the accused officers to get his payment for the works undertaken at the state assembly building by his firm. They demanded a commission for approving his bills, senior ACB officials said.

The officials said that the complaint was registered against the trio on July 31 by the contractor who was looking after the electricity maintenance work at the assembly for the past one year. He submitted bills of Rs 7.5 lakh to PWD and the bills were approved. However to release the money, the trio demanded a 10% commission.

After the ACB verified the complaint, the contractor negotiated with the PWD officials. They eventually agreed to accept a 9% commission.

Dinesh Pareek asked the contractor to come to the state assembly building because it was a ‘safe place’ to get the bribe. The people have to take permission at the main gate before entering the assembly building. But in order to organize the trap, the ACB had obtained permission in advance and when the contractor was handing over the bribe money, the trap officials caught Dinesh and arrested him.

He and XEn Jitendra Dakha and cashier Abdul Kareem were booked under various sections of the Prevention of Corruption Act.