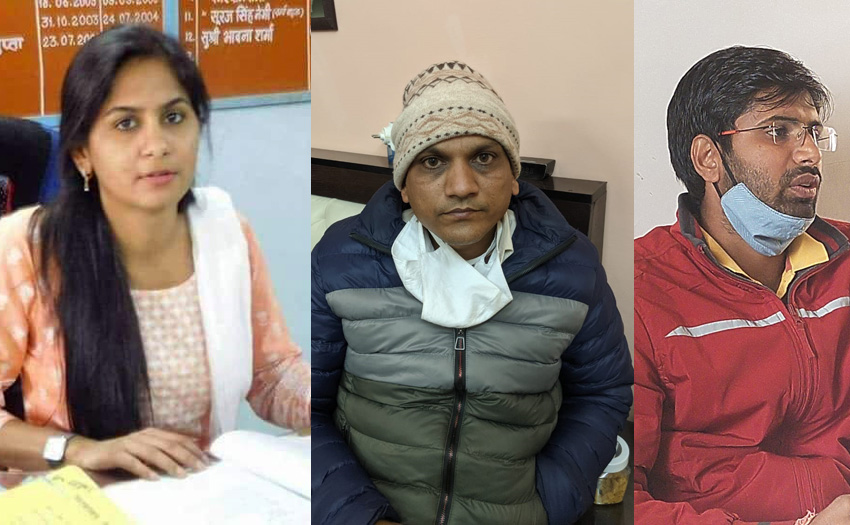 Bandikui SDM Pinki Meena, Dausa SDM Pushkar Mittal and middleman Neeraj Meena who were arrested by ACB in a trap.

The ACB also arrested one middleman Neeraj Meena who was demanding a bribe of Rs 38 lakh in the name of former Dausa SP Manish Agarwal. Meena owns a petrol pump. The two SDMs were pressuring the owner of a highway road construction company to pay bribes to carry out work without any interruptions.

DG ACB BL Soni said that the owner approached the ACB and registered a complaint stating that senior police and administration officials were demanding bribes from him.

“In lieu of clearing files that authorized handing land acquired for the construction of highways from farmers over to the complainant, the police and administration officials of Dausa district were demanding bribes. He was also promised that if he paid the bribes, he would be able to carry out work uninterrupted,” said Soni.

Add DG ACB Dinesh MN verified the complaint and when found it genuine, a trap was laid. Different teams were formed to catch the two SDMs accepting bribes red-handed.

The ACB also caught Meena who was demanding Rs 4 lakh per month and Rs 10 lakh to settle an FIR registered in connection with the construction of the highway.

“For seven months, the total bribe amount was Rs 28 lakh, while an additional amount of Rs 10 lakh was for settling an FIR. So, he was demanding Rs 38 lakh in total,” said Soni.

He added that searches were being carried out at all the belonging to the accused officials and Meena including their residences and offices.

“The officers and the middleman have been booked under relevant sections of the Prevention of Corruption Act,” said the officer.