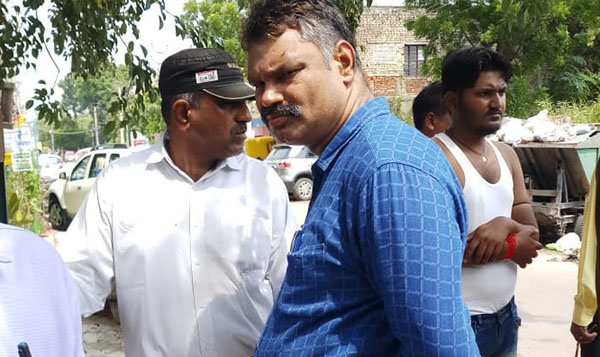 ASI Ratiram who was arrested for taking bribe by ACB.

Jaipur: The Rajasthan anti-corruption bureau (ACB) on Thursday arrested an assistant sub-inspector (ASI) of Mansarovar police station – identified as Ratiram after his middleman was caught red-handed accepting a bribe of Rs 75,000. The middleman – identified as Tarachand – was also arrested. The ASI had demanded a bribe from a man to weaken a police that he was investigating, ACB officials said. Both were booked under various sections of the Prevention of Corruption Act.

ADG ACB Saurabh Srivastava said that a man had approached the agency and registered a complaint against Ratiram and Tarachand. The ACB complainant stated in his complaint that Ratiram was investigating a case in which some women from his family were named as accused. Ratiram demanded Rs 1.5 lakh to remove the names of the women and weaken the case by changing the IPC sections.

After negotiations, Ratiram agreed to accept Rs 75,000, ADG said. The complaint was verified and a trap was laid against Ratiram under the supervision of Add SP Prithaviraj Meena. He and the middleman Tarachand were arrested after they were caught taking the bribe, the officer said.

The ADG said that further investigation in the matter was going on. The ACB was carrying out searches at the office and other places belonging to the accused. Both would be produced in a court soon.