9 killed, many injured in weather-related accidents in Rajasthan

Home » State » 9 killed, many injured in weather-related accidents in Rajasthan 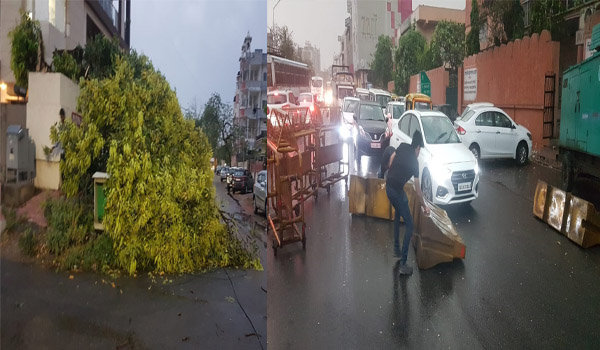 Jaipur: At least nine people died and around twenty people were injured at different places in the state due to heavy dust storm, hailstorm, and rainfall in several parts.

According to the police, at least five people died due to lightning and dust storm in Jhalawar and Baran district of the state on Tuesday.

The two deceased Ravi Lodha (6) and his cousin Anjana (12) were running towards the shade in the field when they were struck by lightning at 4:30 at Samrola Village of Jhalawar district.

Similarly, Jaganath Sahariya (16) died after being struck by lightning at his farms near Denswa village of Baran district.

In another incident at Bakani area, two sisters identified as Shivani Lodha (12) and Manni (9) died on the spot after a tin shade and wall of their house collapsed while they were sleeping.

A teen died due to lighting at Sailana Village of Dausa district. Two teens died at Rajsamand and Udaipur in a similar fashion. An aged men Meethalal (36) died after his house’ wall collapsed in Jamwagarh in Jaipur.

Several were injured after being stuck under trees and poles after they got uprooted during the hailstorm. Also, banners and hoardings fell down due to high-velocity winds in the evening.

Weather condition affected election campaigns too in the state. CM Ashok Gehlot had to cancel his Dausa rally on Tuesday.

Heavy rainfall and winds with a maximum velocity of 60 km/hr were witnessed in the evening. Trees and poles were uprooted, abrupt power cuts occurred along with lightning.

Jaipur Met officials have warned that the weather condition like Tuesday may continue on Wednesday in some parts of the state.

The sudden weather condition is the results of active disturbances from the Bay of Bengal and Arabian Sea, added department officials.