8 students from Rajasthan arrive in Jaipur from war-torn Ukraine 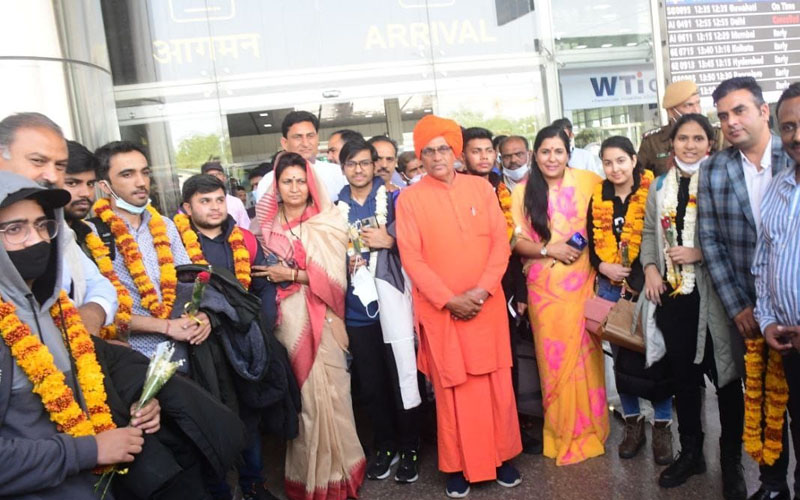 Jaipur: Eight students from Rajasthan arrived at Jaipur International Airport on Thursday after coming to India from war-torn Ukraine. The students expressed relief after meeting their family members, friends and well-wishers. They said that they would never be able to forget the fear they experienced over the past few days since Russia invaded Ukraine.

The parents and family members were anxiously waiting for the students to arrive in Jaipur. They had reached Jaipur airport in the morning and waited for hours. Member of parliament Sumedhanand, Industries Minister Shakuntala Rawat, Mayor Greater Soumya Gurjar, MLA Rafiq Khan and many other politicians also reached the airport to receive the students.

The students said that their experience was scary. They lived in fear in Ukraine over the past few days.

Aditi Dhakad, who was one of the students, told media persons that she was relieved to be back with her family.

“I wanted to be a doctor and study in a local college, but we were not able to afford the fee which was about Rs 1 crore. I had to go to Ukraine to get an MBSS degree as the fee is just Rs 20 lakh. Like me, hundreds of students from Rajasthan and all over country are studying in Ukraine. They are also scared and are praying for safe return,” said Aditi.

At Jaipur airport, the industries minister said that the government would bear the expense of children coming to the state. A proposal in this regard is under consideration. The students who arrived in Jaipur were identified as Sanjay Singh Meena, Gorav Kumar Meena, Abhishek Soni, Vijay Kaustuk, Tina Kumari, Gaurav Saraswat, Aditi Dhakad, and Ajay Kumar.