8 of family killed in tragic road accident in Barmer 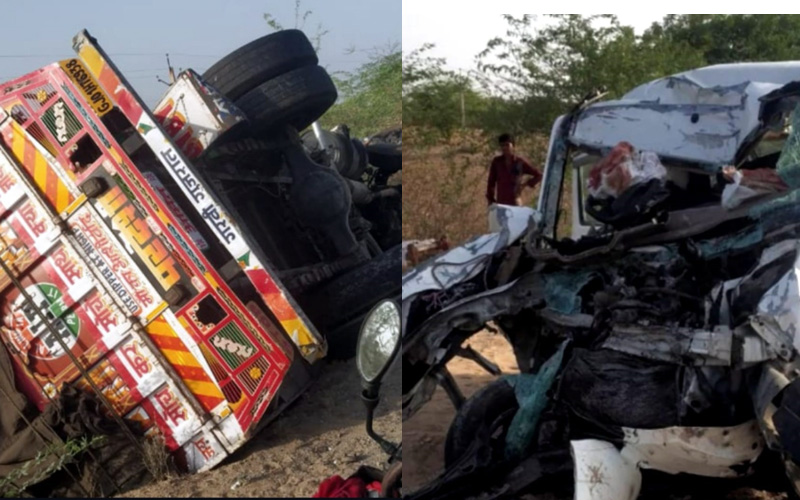 Truck and SUV that were damaged in accident.

Jaipur: Eight people from a family were killed, while one other was seriously injured when the car, they were travelling in, collided with a truck in Barmer district of Rajasthan late on Monday. The victims were part of a wedding procession. They were about to reach the wedding venue when the mishap occurred near Bata Phate under Gudamalani police station.

The victims belonging to Sedia area of Jalore were identified as Poonmaram (45) – son of Dhimaram, Prakash (28) – son of Pemaram, Manish (12) – son of Poonamaram, Prince (5) – son of Mangilal, Bhagirathram (38) – son of Pokraram and Poonmaram (48) – son of Bhagwanram, Mangilal (35) – son of Nainaram and Budhram (40) – son of Kanaram. While six people died on the spot, two others succumbed to injuries during treatment. One Prakash (20) – son of Harjiram Vishnoi was seriously injured, and is undergoing treatment at the hospital in Sanchore.

The victims were on their way to Kandhi ki Dhani where the wedding was to take place. The mishap occurred just 8 km from the wedding venue.

Some other vehicles – part of the wedding procession – were also behind the car that collided with the truck. When the passengers in other vehicles saw the accident, they immediately informed the police and tried to rescue the victims. The victims got trapped in the car as it was completely damaged.