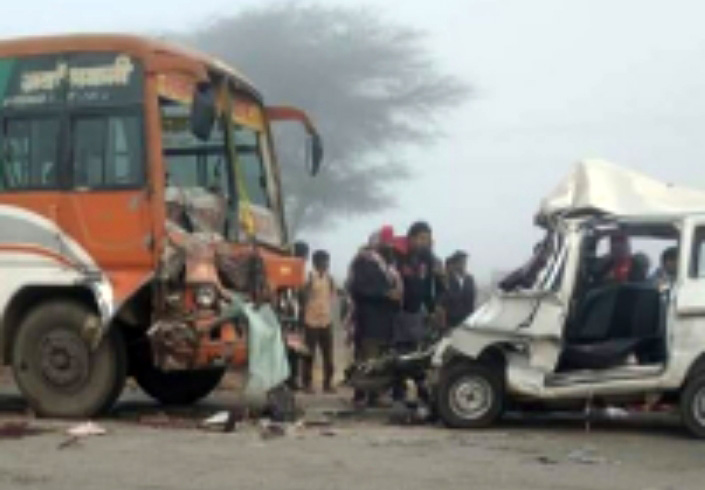 A video grab of the van and bus that collided on NH-11 in Churu.

Jaipur: At least eight people were killed, while many others were injured when a private bus and a van collided head-on on National Highway – 11 near Ratangarh of Churu on Thursday morning. According to preliminary reports, the bus was over-speeding and there was dense fog reducing visibility on the road. This may have caused the accident. The police have launched an investigation.

The majority of the victims were members of a family who were on their way to Ratangarh from Bikaner. A wedding was scheduled on January 9. They were coming to Ratangarh to meet some relatives and distribute wedding invitation cards.

The mishap occurred on NH-11 between Rajaldesar and Parasneu villages around 9 am.

The bus was on its way to Bikaner from Ratangarh. According to eye-witnesses, it was overspeeding. Both the vehicles collided head-on.

The injured were rushed to a hospital where at least eight of them were declared dead. The majority of the deceased people were travelling in the van which was severely damaged in the mishap.

Police teams from Ratangarh and Rajaldesar police stations rushed to the spot and pulled the victims out of the vehicles. The bodies got stuck in the van.

The police said that the bus driver fled from the spot after the mishap. An FIR has been registered against him for rash and negligent driving. The efforts were on to identify the victims till the reports last came in. The bodies were put in the mortuary of a nearby government hospital for postmortem examination.