Dave, a former cabinet minister contested assembly elections from Marwar Junction in Pali in 2018 as an independent candidate. 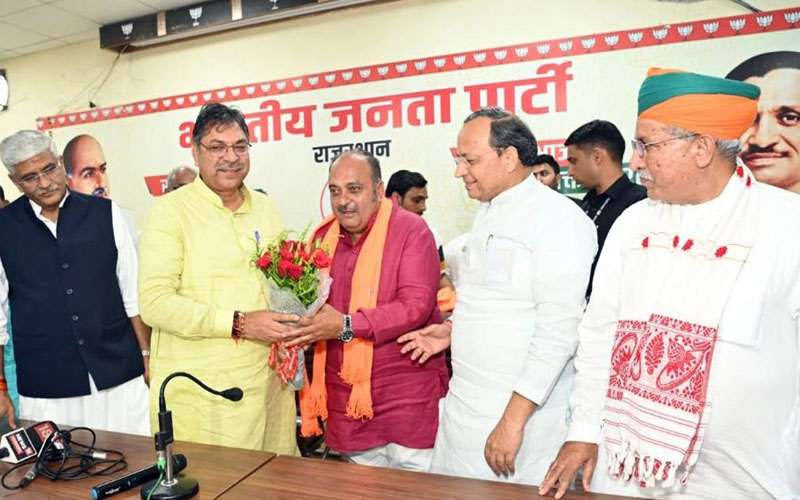 JAIPUR: Seven political leaders joined Rajasthan BJP on Sunday. These leaders including former cabinet minister Laxminarayan Dave were accompanied by their supporters in large numbers. The BJP leaders termed this a big victory ahead of the assembly and Lok Sabha elections.

Dave, a former cabinet minister of the Forest, Environment, Mineral and Petroleum Department contested assembly elections from Marwar Junction in Pali in 2018 as an independent candidate. He was earlier with the BJP, so it is a homecoming for him.

Mahendra Singh Bhati, who contested as an independent from Osian in Jodhpur in 2018, joined BJP along with 11 sarpanches and 200 workers.

The other leaders who joined the BJP include Vikram Singh Jakhal, Bannalal Meena, Chandrashekhar Yadav, Onkar Singh Walia and Bhagwati Lal Menaria. Jakhal had contested the 2018 assembly elections as an independent candidate from Nawalgarh in Jhunjhunu, while Bannalal from Rajgarh in Alwar.

Vikram Singh Jakhal contested as an independent from Nawalgarh and was defeated by Dr Rajkumar Sharma of Congress.

“We are a party with a broad ideology and many right-thinking political leaders want to join us. We expect more like-minded politicians to join us in the coming days. I don’t think anyone would be left for the Congress,” said BJP state president Satish Poonia.