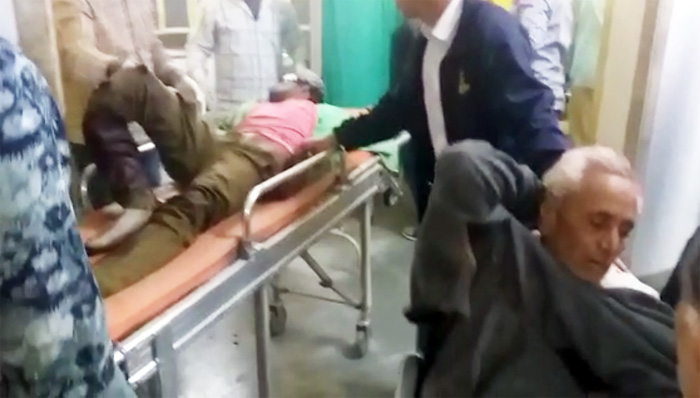 The injured victims being treated at a hospital.

Jaipur: At lease seven people were killed, while 12 others were inured when a mini-bus collided with a jeep on the road connecting Reengus and Khatu Shyam Ji towns in Sikar district on Wednesday evening. The injured were rushed to a hospital in Khatu Shyam Ji from where some of them have been referred to SMS Hospital in Jaipur for treatment due to their critical condition. The police are investigating what caused the mishap; however, didn’t rule out the possibility that the vehicles were overspeeding.

The mishap occurred near Chomu Purohitan village on Reengus-Khatu Shyam Ji Road. The collision was so intense that both the vehicles were badly damaged. The local residents informed the police following which police teams were rushed to the spot. Local police and administration officials including DySP, SHOs of Reengus and Khatu Shyam Ji police station and SDM also arrived at the spot.

“About 12 people were injured in the road accident which was probably caused by overspeeding. The medial teams have been roped in to provide treatment to the injured victims. The rescue operation has completed. We are trying to identify the deceased,” a senior administration officer said.