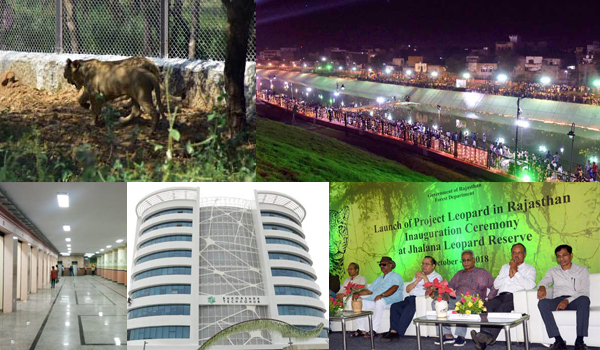 Jaipur: From the change of guard to the launch of some big projects, Jaipur witnessed many big events in 2018.

The year ended with the Congress coming to power by winning 100 assembly seats. Congress senior leader Ashok Gehlot was appointed as new Chief Minister of Rajasthan for the third time.

Former Chief Minister Vasundhara Raje inaugurated the much-awaited Dravyavati River Project at Landscape Park in Shipra Path on October 2 in Jaipur. The 13 km stretch of Dravyavati riverfront out of 47 km – that is the area from Sushilpura to Bambala bridge – was thrown open for residents. The two other parks that are Bird Park at Panipech and Botanical Garden at Bambala were also inaugurated.

India’s first ever ‘Leopard Reserve’ was inaugurated at Jhalana forest in Jaipur on the occasion of World Animal Day. Former Chief Minister Vasundhara Raje inaugurated the Jhalana Leopard Reserve in Jaipur under the first ever ‘Project Leopard’ initiated by the state government on October 4. It contributed to the wildlife conservation drive and boosted the tourism sector.

Lion safari at Nahargarh biological park in Jaipur was thrown open to the public on October 3. The visitors are able to sight three cubs named as Tejas, Tripur, and Taara roaming freely over an area of 36 hectares.

Some new flights were introduced connecting Jaipur directly to Kolkata, Raipur, Vadodara, Hyderabad, Bhopal, Agra, Indore, Sriganganagar, Bengaluru, Chennai, Pune, and Lucknow in the past few months. A new taxiway was also constructed on the airport for smooth operation of flights.