The wife didn’t have a cordial relationship with her husband. She had in fact registered a case of domestic violence against him a few months ago. It made the police to focus their investigation on her role. She proved a hard nut to crack, but the police exposed the entire conspiracy. 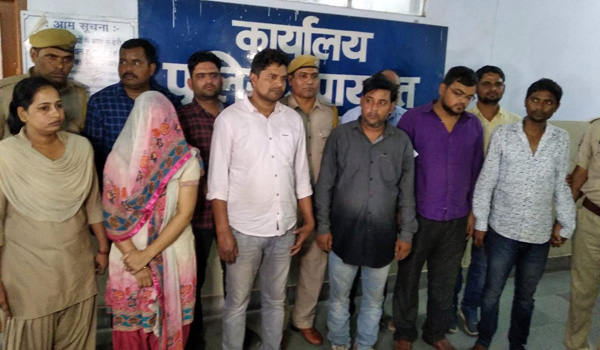 Five persons who were arrested for the Banker Roshan Lal Yadav murder.

Jaipur: Nearly five days after banker Roshan Lal Yadav was shot dead in Kardhani, the Jaipur police on Monday arrested five persons including the victim’s wife and his neighbour for the shocking murder. Those arrested include one Umesh Sharma who was allegedly into a relationship with the victim’s wife Nirmala Yadav, according to the police.

Sharp shooters had been hired for the murder that took place on September 19. DCP Ashok Gupta organized a press conference and revealed that the victim’s wife was involved in the murder.

“It came up during our investigation that Nirmala was into a relationship with Umesh for the past one year. Umesh’s location was in Uttarakhand after the murder, so a team was rushed there. Umesh along with his brother-in-law Akash Rawat and friend Mahendra Pratap were taken into custody for interrogation from a hotel in Almora in Uttarakhand,” said DCP Gupta.

Umesh Sharma had been a neighbor of Roshan Lal since 2010. Umesh was in contact with Nirmala through WhatsApp and other social media channels since January, 2017.

Nirmala asked Umesh to kill her husband Roshan Lal. In April, Umesh Sharma contacted his brother Rahul Sharma and paid him Rs 4 lakh to hire contract killers. Shooters from Firozabad, identified as Shivkant alias Lalu, Pappu Kashyap and Vishnu Kashyap, came to Jaipur to murder Roshan Lal, but the shooters increased their demand and asked for Rs 15 lakh to kill the banker.

Unable to pay Rs 15 lakh, Umesh pressurized his brother to get the job done as he had already paid Rs 4 lakh. Rahul who was under huge debts shot dead Roshan Lal with the help of his nephew Manish alias Sunny on September 19.

Nirmala had been interrogated by the police in connection with the murder. After confirming her role, the police arrested her and her paramour Umesh who had paid UP-based sharpshooters money to kill Roshan Lal Yadav. Umesh used to live in the victim’s neighborhood.

The wife didn’t have a cordial relationship with her husband. She had in fact registered a case of domestic violence against him a few months ago. It made the police to focus their investigation on her role. She proved a hard nut to crack, but the police exposed the entire conspiracy.

Those who were arrested are Nirmala, Umesh and three others including Mahendra Pratap alias Titu, Akash Rawat and Shivkant alias Lalu.

Police examined footages of CCTVs installed in the area. As per preliminary reports, the deceased Roshan Lal Yadav was employed with City Bank on MI Road. His job was to process loan applications for commercial vehicles.