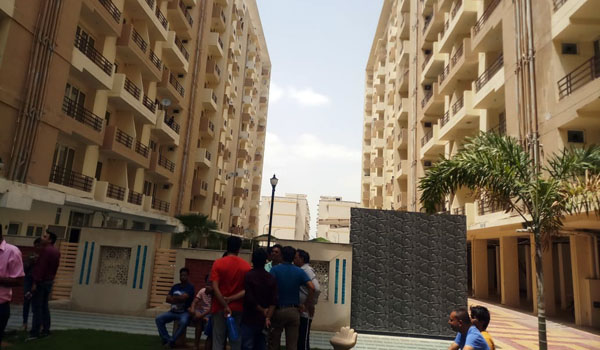 Apartment building in Bhankrota where 3 youths were being held captive.

The youths were being held captive by the gang for the past one week and were being tortured. The gang members had chopped off their ears and pulled out their finger nails in order to terrorize their family members and get ransom from them.

The police stumbled upon the gang while investing a case of robbery that took place on Saturday night. The probe led them to a flat in Bhankrota. A team of over 100 policemen searched the building and launched a rescue operation that went on for almost 12 hours.

The gang was busted while the police were investigating a robbery. The gang members robbed four men of their car in Mahapura and kidnapped a man, identified as Sarthak Saxena – a resident of Malviya Nagar. The investigation led the police to Shankra Residency in Omex City.

Those who were rescued were identified as Lutfan Sheikh (19) – a resident of Thane area in Maharashtra, P Malang Shah (44) – a resident of Chitur district in Andhra Pradesh and Mohammed Shahzad (36) – belonging to Bikaner in Rajasthan.

Lutfan Sheikh was called to Jaipur by the gang on the pretext of Bitcoin investment. Similarly, P Mangal Shah was also lured into coming to Jaipur in the name of investments in agencies.

Mohammed Shahzad was the friend of Lutfan and had come to Jaipur to help him. But fearing that he would expose them, the gang members help him also captive.

They were planning to get ransom from the family members of the victims and were torturing them.

When the police came to know about the kidnapped men, they surrounded the building and searched all the flats. The seven kidnappers were arrested over 12 hours.