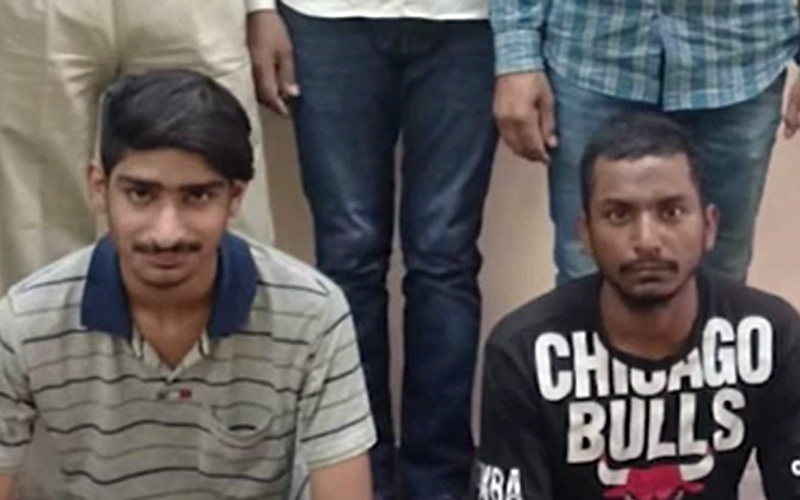 Two of the three youths arrested for smashing cars in Jaipur.

Jaipur: The city police has arrested three youths for smashing 18 cars in Mahesh Nagar, Shyam Nagar and Sadar police station areas. The accused men told the police that they did this for fun. They enjoyed smashing a car and then decided to smash the windows of a few more.

Those arrested have been identified as Ravindra Yadav (18), Shubham Sharma (20) and Kalu (20). They were enjoying a bike ride after leaving home. After they smashed the first car, they thought it was fun. They then went on a spree.

They told the police that they hadn’t realized they would be caught. “They told the family members that they would see a friend. They used stones to smash the first car and then found an iron rod,” said a police officer.

The police officer said police teams were formed to catch the culprits after getting information about the incidents. Footages of CCTVs installed near the places where the cars were parked helped police identify them. Three have been arrested, while a search is on for four others.

In Mahesh Nagar, they smashed 11 cars. Many local residents including Ashish Sharma, Piyush Kumar, Kamla Khetan, Pawan Jha and Vijit Vashishtha lodged complaints after their cars were smashed by the culprits.

The youths even stole a mobile phone and some currency from a car after smashing its windows in Shyam Nagar, police said adding that another car was damaged in the Hatwara Road area of Sadar police station. One Prakash Sharma has registered a complaint regarding this.

It is suspected that many car owners whose vehicles were damaged are yet to come forward and register complaints with the police.