2 students killed as bike collides with bus on Tonk Road

After the accident, both students were admitted to hospital in a critical condition and died while undergoing treatment. 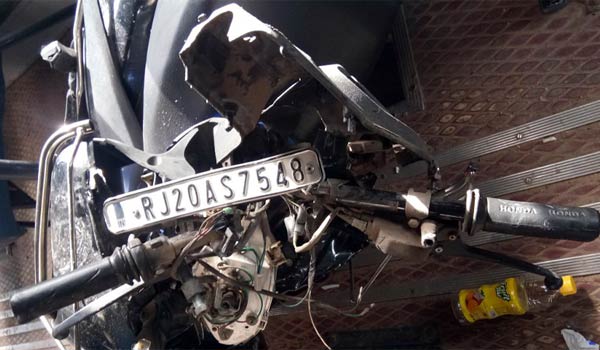 Bike that was damged in Tonk Road accident.

Jaipur: In a major mishap, two students were killed after being hit by a speedy bus late night on Wednesday near Tonk road, Jaipur. The bus driver fled the spot after the accident. An overspeeding bus collided with two students riding a two-wheel vehicle and dragged them up to a long distance of 50 meters under it. After the accident, both students were admitted to a hospital in a critical condition and died while undergoing treatment. The deceased have been identified as Abhimanyu Singh (24) and Himmat Singh (24), residents of Kota. They were preparing for the competitive exams and were currently living in Jaipur. Both of their fathers are retired army officers. Abhimanyu and Himmat shifted to Jaipur last year and were currently working in a call center while preparing for the competitive exam. Soon after the accident, police informed parents of the deceased victim. A post mortem examination was conducted and their bodies were handed over to their family members on Thursday morning. The bus was carrying Hajj pilgrims to the airport when the accident happened near Ashram road. The bus went out of control due to fast speed and hence the accident happened. As soon as the information was received, police reached the spot. Hajj Pilgrims were transported to their destination safely in another bus. According to police officials, the bus was of Hanumangarh Bus Depot and was going to Sanganer airport from Sriganganagar carrying Hajj pilgrims. Vehicles have been seized. The accident was so intense that the scooter of the deceased was completely damaged.
Follow @ThePinkcityPost
Click on the following link(s) to find the latest & related stories on: Bus- Bike accident