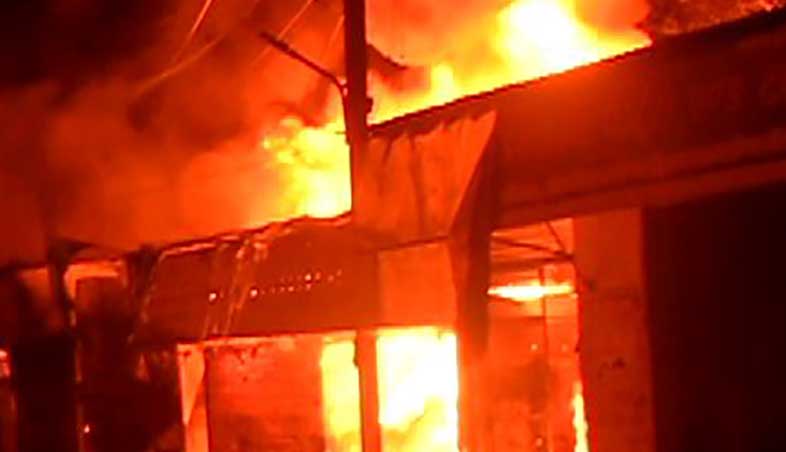 Jaipur: Panic swept through Sripura Machhali Market in Kota late on Tuesday when a major fire broke out causing a series of explosions in auto parts and scrap shops. Two people were killed in cylinder explosions, while at least six others were injured. The fire was controlled by wee hours on Wednesday.

The fire broke out around 8.45 pm. It started from one of the shops and then spread to many others. Most of the shops belonged to scrape dealers and auto mechanics.

It took fire fighters nearly 6 hours to control the fire. The fire could not be doused completely till early morning.

Those killed in the explosions were identified as Rajudin Qureshi (35) and Mustafa Qureshi (44). One of them died on the spot, while the other succumbed to burning injuries while undergoing treatment at MBS Hospital.

The family members of the duo demonstrated at the hospital against immediate postmortem examination of the bodies.  District collector Rohit Gupta had to intervene and placate them.

People alleged that they had called up the fire department immediately when they saw the blaze, but fire didn’t show up for nearly an hour.

There are about 300 shops in the market. Most of them were closed when the fire started.

The shops were in a narrow street, making it difficult for fire fighters to launch an effective fire fighting operation.

The cause of fire is being investigated, but short-circuit in power supply wires may have triggered it, officials.

Senior police and district administration officials rushed to the spot.