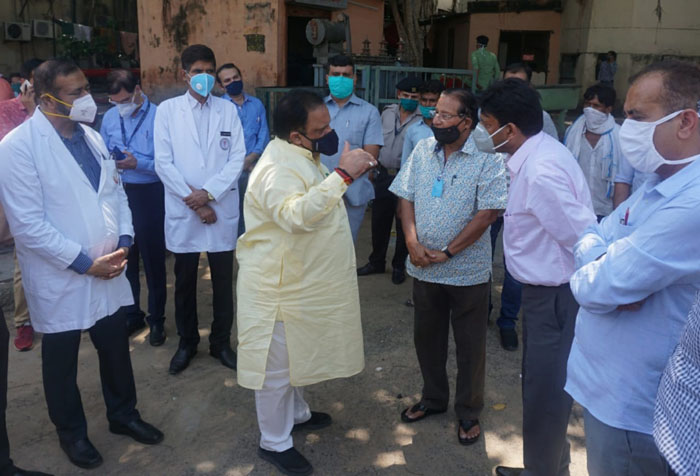 Jaipur: A 15-storey IPD tower and Cardiac Care Centre will be developed at Sawai Man Singh (SMS) Hospital at a cost of approximately Rs 200 crore under Smart City Project, where patients under one roof will be provided all facilities including consultation and tests to operation.

Dr Sharma said it was being felt that the SMS hospital built in 1947 is lacking a lot of ultramodern facilities. A 15-storey IPD tower will be constructed where cottage wards are currently situated. He said that 150 cottage wards will be built in this tower including 100 cubicles and 50 VIP cottages.

The Health Minister said that a floor in this multi-storey tower will have operation theatres, post-operation theatres, ICU wards, MRI, CT Scan equipment, cafeteria and doctors chambers. He said the government’s intention is that patients should get better treatment with minimum hassles. He said that the Local Government Minister has assured that a budget of Rs 200 crore has been fixed for this and in future too there will be no dearth of budget.

The Health Minister said that a Cardiac Surgery Ward will be built with an estimated cost of Rs 50 crore near the Nurses quarters, where the patients of Bangur could be transferred. Apart from this, a Food Park will be constructed within the hospital premises and efforts will be made to bring the unorganised shops under one roof so that the hospital undergoes a transformation along with the patients and their family members to get a better atmosphere.

He said that an underground passage was made to connect the Trauma Centre and the Super speciality Block, but it could not be used due to rains. He said that the architect has been directed to make the passage easy so that the route could be used freely. He said that if the State Government gives the government houses situated on Hospital Road then they could also be used as super speciality blocks and power houses.